I was enjoying my polar books the other night and came across a quote attributed to everyone's  favourite humanitarian polar explorer and scientist, Fridtjof Nansen.

If I were not a Norwegian, I would be an Englishman rather than belong to any other nation

Nansen is quoted in Fridtjof Nansen, his life and explorations, by James Arthur Bain, 1897.

It's hard not to be in awe of Nansen.

END_OF_DOCUMENT_TOKEN_TO_BE_REPLACED

"England knows Scott as a hero; she has little idea of him as a man. He was certainly the most dominating character in our not uninteresting community: indeed, there is no doubt that he would carry weight in any gathering of human beings. But few who knew him realized how shy and reserved the man was, and it was partly for this reason that he so often laid himself open to misunderstanding.

Add to this that he was sensitive, femininely sensitive, to a degree which might be considered a fault, and it will be clear that leadership to such a man may be almost a martyrdom, and that the confidence so necessary between leader and followers, which must of necessity be based upon mutual knowledge and trust, becomes in itself more difficult. It wanted an understanding man to appreciate Scott quickly; to others knowledge came with experience.

He was not a very strong man physically, and was in his youth a weakly child, at one time not expected to live. But he was well proportioned, with broad shoulders and a good chest, a stronger man than Wilson, weaker than Bowers or Seaman Evans. He suffered from indigestion, and told me at the top of the Beardmore that he never expected to go on during the first stage of the ascent.

Temperamentally he was a weak man, and might very easily have been an irritable autocrat. As it was he had moods and depressions which might last for weeks, and of these there is ample evidence in his diary. The man with the nerves gets things done, but sometimes he has a terrible time in doing them. He cried more easily than any man I have ever known.

What pulled Scott through was character, sheer good grain, which ran over and under and through his weaker self and clamped it together. It would be stupid to say he had all the virtues: he had, for instance, little sense of humour, and he was a bad judge of men. But you have only to read one page of what he wrote towards the end to see something of his sense of justice. For him justice was God. Indeed I think you must read all those pages; and if you have read them once, you will probably read them again. You will not need much imagination to see what manner of man he was.

And notwithstanding the immense fits of depression which attacked him, Scott was the strongest combination of a strong mind in a strong body that I have ever known. And this because he was so weak! Naturally so peevish, highly strung, irritable, depressed and moody. Practically such a conquest of himself, such vitality, such push and determination, and withal in himself such personal and magnetic charm. He was naturally an idle man, he has told us so;[134] he had been a poor man, and he had a horror of leaving those dependent upon him in difficulties. You may read it over and over again in his last letters and messages.[135]

He will go down to history as the Englishman who conquered the South Pole and who died as fine a death as any man has had the honour to die. His triumphs are many—but the Pole was not by any means the greatest of them. Surely the greatest was that by which he conquered his weaker self, and became the strong leader whom we went to follow and came to love."

Apsley Cherry Garrard wrote that in the Worst Journey in the World.

Captain Scott was a complex man.

British Pathé News was a British institution that produced news reels and documentaries from 1910 to 1970. Their website is full of news clips of polar interest such as Shackleton’s death in 1922.

But here is something wonderful and obscure. Gambling with the Gulf Stream made in 1936!

In just 2 and a half minutes the voice-over explains what the Gulf Stream is, how much heat it carries (“every day it gives more heat than the world’s coal supply in 2 years“), and what would be the impact on some regional climates if its pathway was deliberately moved by geoengineering.

END_OF_DOCUMENT_TOKEN_TO_BE_REPLACED

In the old days Antarctica wasn’t mapped and measured by satellites like it is now. In the past it was all about exploration. Scientists were dropped at bases by ship, and then left for at least a year - sometimes two. Very occasionally more.

When winter comes the sea ice freezes up and the area of sea ice is vast. But after the winter, spring brings long days of light, and that meant travel by dog sled was possible over the ice!

To make the sled journeys more efficient food caches were left along the coast the previous summer perhaps by the same ship that left them. Then the scientists could journey easily over the frozen sea ice to the food cache, and then work inland in their area of operations.

Which brings me to these pictures. This is a food cache left by a ship (I think) in 1962 for a science team setting out from Hope Bay. 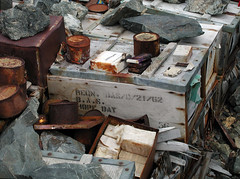 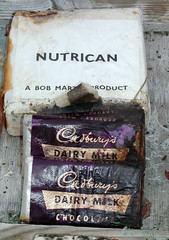 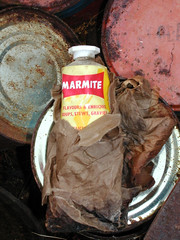 In Antarctica Marmite can come in tubes 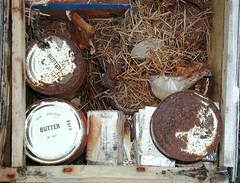 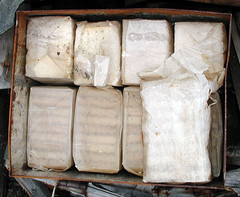 A tin of biscuits in an Antarctic Food Cache 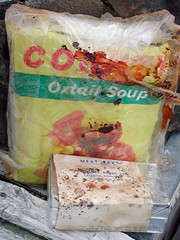 Oxtail soup and a meat bar

A pile of wooden sledge boxes that contain all human needs: chocolate, biscuits, marmite, meat and soup. What more could you want?

END_OF_DOCUMENT_TOKEN_TO_BE_REPLACED

It's very common to hear people harking back to the time when everything was apparently "better". Before the planet was "ruined", before anthropogenic climate change kicked in, and when everybody treated each other with respect.

Of course I don't hold that view.

Polar exploration had a golden age of sorts which is usually called the Heroic Age. It covers the time period when explorers like Mawson, Shackleton, Speirs Bruce and Scott headed South.

I am interested  in the time period before that too.

The British Library have put over a million images on Flickr. With that sort of resource surely there is something polar before the Heroic age?

Searching on the term "Antarctic" throws up a vast number of results -and a couple immediately caught my eye. They were pictures drawn by one of my new favourite artists: the Scot William Gordon Burn Murdoch.

Ever since I started researching and writing about the polar regions I have always been struck by how people seem to imagine them as some sort of "untouched wilderness". This image naturally caught my eye.

END_OF_DOCUMENT_TOKEN_TO_BE_REPLACED

I am working on a polar oceanographic problem at the moment, but the beauty of physics is the principles are universal. That means you can end up reading widely. I came across a very interesting paper (to me):

Through the joys of open access a PDF of the paper is available on the Ifremer Archimer institutional repository.

Whilst reading the paper I quickly skimmed over the PDF to see if I was on the right track for what I was interested in. It looked good so I went back to the beginning and starting reading in more detail.

"Clipperton island got the reputation of being one of the most obscure, isolated and unpleasant places on earth"

I thought "eh?" I like a bit of unpleasantness but...

So I read on...  The paragraph gives a quick history of the occupation of Clipperton Island. It was first occupied as part of the phosphate mining industry. But it doesn't have a happy history.

"In this tiny tropical hell, many became desperate to leave, convinced that the island was driving them mad. During World War I, the islanders were cut off from the mainland and died little by little from scurvy and malnutrition. The survivors, a handful of women and children, became ruled by a madman (the light keeper) who proclaimed himself “King of Clipperton”, raping whomever he wanted and murdering any who resisted. Eventually, the women killed him, putting his reign of terror to an end. By July 1917, three women and eight children were the only ones alive and were picked up by the USS “Yorktown”. Its last permanent occupation was in 1944/45 when President Roosevelt ordered the US Navy to seize the atoll. Soon after World War II ended and the atoll was abandoned"

Scurvy, malnutrition, rape and murder. I don't come across that sort of thing very often in the area of oceanography I research.

Clipperton Island is about 580 nautical miles off the coast of Mexico.

There is a very good Wikipedia page on Clipperton Island. This is quite surprising given that the atoll is only 6 km2 with a maximum elevation of 29m. It seems to be pretty regularly visited by members of the amateur radio community, and there was a private expedition there in 2013.

If you are interested in the Law of the Sea it seems that in December 2010 the French claimed an exclusive economic zone around the island under the provisions of the United Nations Commission on the Limits of the Continental Shelf (CLCS).

That would mean this 6 km2 atoll has given the French a territorial claim of 1.52 × 109 km2 of sea bed in the pacific and the ownership of the resources there.

Not bad for a place that can barely sustain human habitation.

And the stuff in the paper about tritium was pretty good as well.

Whilst wandering around various old textbooks I came across a wonderful quote:

Polar ice cannot be studied as other branches of science, philosophy, medicine or law are studied. The study of sea ice belongs among the most exhausting disciplines which have to be studied on the spot, in loco status nascendi et vitae, and which require strong men, absolutely sound in mind and body, courageous, willing and fit to renounce all comfort, thoroughly prepared both in theory for the work and ready to face all the hardships that may come like a bolt from the blue and in the most unfavourable moments. The sea-ice has to be studied far away, in the north or south, in white deserts of ice, where there is nothing, nothing else, no shelter no help; and where, on those vast plains in which the chasms of the sea keep tearing open and unsurmountable obstacles in the shape of mountains of ice keep piling up, the Lord only is with man.

“and as long as man will listen to the roar of the waves above the depth of the the sea, as long as the human eye will follow the play of the northern light on the silent snowy landscapes, and far away in infinite space, and so long as it will look out for the celestial bodies far away in infinite space, so long the romance of the Unknown will lead the human genius forward and upward!” (Nansen, Nebelheim.)

It is a quote from the beginning of Cryologia Maris by Josef Zukriegel, which was published in 1935 by the Geographical Institute of the Charles IV. University.

All of what Zukriegel says is all true of course - except naturally lots of women do sea ice research as well. In fact if you look at the latest AR5 IPCC report, and chapter 4 which is on the cryosphere, you will see many brilliant women polar scientists in the reference list.

Josef is a bit hard to track down for a Brit, but he does have an island named after him in Antarctica. If you look at the extremely useful gazetteer of the UK Antarctic Place names committee you can see it is actually in quite a hard place to get too.