I heard today that the UCL Prof Seymour Laxon has died in an accident over the new year. I don't know the details and to be honest, to me, the "how" is not really that important (*).

Seymour was the Director of the Centre for Polar Observation and Modelling at UCL, and was a world leading scientist, and science leader. Given the state of the polar climate I have no doubt that his work on Cryosat derived sea ice record would have been a true landmark of climate data. The ESA Press release and the BBC Cryosat news story show how significant the work he was leading on is. If you are not familiar with it you may have heard or read media stories of how the sea ice volume in the Arctic is decreasing at an astonishing rate. These stories mainly come from the PIOMAS data set (the Pan-Arctic Ice Ocean Modeling and Assimilation System) which uses measurements of the sea ice extent and then is a modelling output. Whilst there are of course caveats with that work, the plots from that project are compelling.

One of the things Seymour was working on was to use Cryosat data to derive an ice volume based on actual measurements. This is, as Jonathan Amos wrote a hugely significant breakthrough. Some of the science in this work reached the media in August 2012 but from my conversations with Seymour, perhaps it came out not the way he would have liked or at the time he would have chosen. That aside it is very very good stuff.

In a science world that is made up so many disciplines the average UK environmental scientist would not be aware of the impact of Seymour's ideas, drive, vision and leadership. One simple measure to the lay person is to look at the research income he has raised from for example the Natural Environment Research Council - but that of course excludes what he was funded from the European ESA. Another element is that you could look at his published research which will stand forever as a pillar of how good he really was at getting his "hands dirty".

I could pick many examples of his published science but this is a typical example: this Nature paper of his is magnificent. 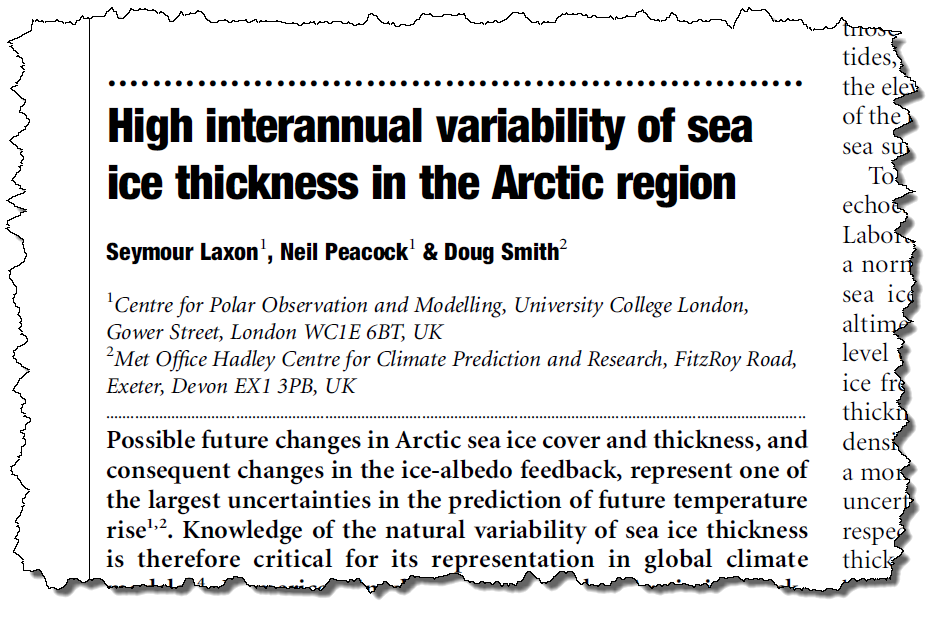 In this paper Seymour and his two co-authors derived an 8 year time series of the Arctic ice freeboard using data from the ERS-1 and ERS-2 satellites. The take home message is that they showed that the Arctic sea ice thickness is dominated by the summer melt and not the ocean circulation. The implications are, as they say,

"a continued increase in melt season length would lead to further thinning of Arctic sea ice".

Watch this space for the long time view on that one. It's a good paper with over 300 cites so far. You can download it from the CPOM www site and read it for yourself.

Seymour was sharp too - in the good sense. I have had the "pleasure" of being pulled up at a conference by him for something he thought I could do better. He was right of course.

Like many scientists he could be quirky as well. I took the picture at the top of this page in Hobart, Tasmania in the month of July. We had left England in a heat wave and it was horrible and sticky at Heathrow. Seymour had forgotten to get an Australian visa in advance and so had a busy time at Singapore sorting that out. But it was only when he got off the plane in Hobart that he realized he only had English heatwave level summer clothing.

It was mid-winter in Hobart and we were at a workshop to discuss ice. 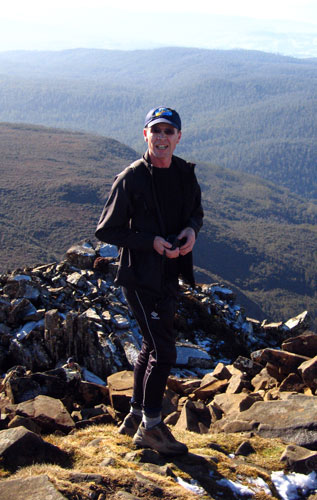 He bought that coat he is wearing in the pic. I was jealous at the time - it looked a great coat, and what an excuse to renew your polar kit.

A couple of days later we were over 4000 ft and in freezing conditions in the Hartz Mountains. He said the coat worked really well.

I know that is a trivial story but it's one of my memories that I will share. Many more I keep for myself.

I never meant to write an anything like an obituary and I hope I never have to. I just wanted to write something about my friend and occasional work colleague.

I wish all good feelings to his family and many other friends. I hope they enjoy their memories of Seymour as much as I enjoy mine.

* If that sounds insensitive I apologize. To me the "how" is no more important than how my dad died - which I don't know either. In that case I went to the arctic on a research trip, came back, and my dad was gone. That was all that mattered to me then, and Seymour being now a series of great memories is for me, the same.

In the unlikely event that you arrived here without knowing about it, Seymour's family, friends and colleagues have been contributing to a fantastic Tumblr site: