This post got the dreaded TL; DR on Reddit - but at least "they" acknowledged it was useful. Since it takes someone else to pick out the value in your work I offer this tweet from Jason Major. 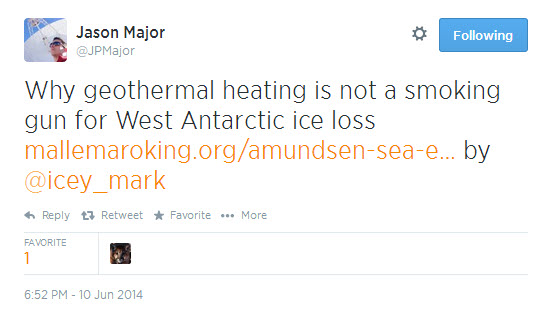 A significant area of Antarctic glaciological interest is the West Antarctic Ice Sheet (WAIS) and where it discharges into the Amundsen Sea Embayment.

It is a research focus (e.g. iSTAR) because it is the region where the glacier ice is melting very rapidly.

A great research article by Dustin Schroeder (The University of Texas at Austin) has just been published in PNAS which presents evidence for the geothermal heat flux beneath the Thwaites Glacier. 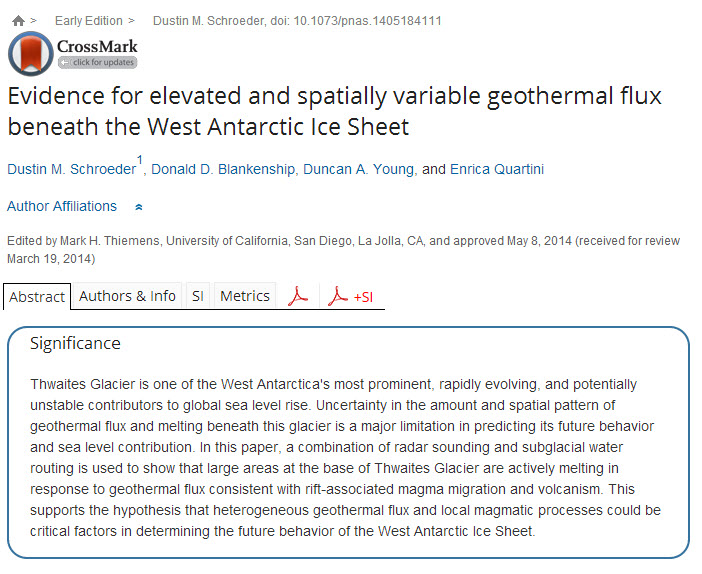 The paper is available on the PNAS site and it is open access.

Schroeder and colleagues use radio echo sounding to detect the bed of the glacier. They see water beneath the ice. In 2013 they published a paper in PNAS interpreting these observations as a vast subglacial water system under West Antarctica's Thwaites Glacier. (There is a nice EurekAlert about the under ice “river” system).

In this current 2014 paper about geothermal heat, they interpret some of their water observations as being due to heat from the Earth’s core. The paper has some beautiful (to me!) figures including Figure 3 a map of geothermal flux required to produce the melt water they observed:

This is brilliant because not only did they show there was an active water system in 2013, but they are now using their data to understand the nature of the water system beneath the ice sheet.

People tend to think “frozen” as stationary, and they can understand Antarctica as a static system – but in reality there are hundreds of under ice lakes like Vostok, There is - in places - extensive melting and refreezing of water going on under the ice – as pointed by out Robin Bell and colleagues in 2011.

Plus the under ice “river” system Schroeder and colleagues identified in 2013.

It is a very exciting time in polar research and I am looking forward to what this group publishes next.

Schroeder and colleagues Figure 3 (above) shows geothermal flux (that is heat from the Earth) and a conversion to basal melt rates of the glacial ice. Their scale shows it goes up to 6 mm/yr.

Is this a big number?

The picture below was taken from a preprint of Hofmann and Morales Maqueda (2009).

But it is much bigger than the values in that region of the Earth in the Pollack et al (1993) data.

Is the geothermal heat significant for melting the West Antarctic Ice Sheet?

Take Pine Island – which is adjacent to the Thwaites.

Pierre Dutrieux and colleagues had this to say in 2013 of the basal melt rates.

“At the broad scale [basal], melt rates of up to 100 m/yr occur near the grounding line [where the ice meets the ocean], reducing to 30 m yr/ just 20 km downstream [over the ocean]."

And the geothermal heat is clearly extremely variable in space.

And if you want go one step further then Park and colleagues said that this basal melt rate due to the ocean was increasing at an accelerating rate of 0.53 ± 0.15 m / yr−2.

Schroeder and colleagues work is, in my view, excellent and very significant. It demonstrates a hidden component for glacier hydrology.

But it is not the reason for the observed melt of the WAIS. 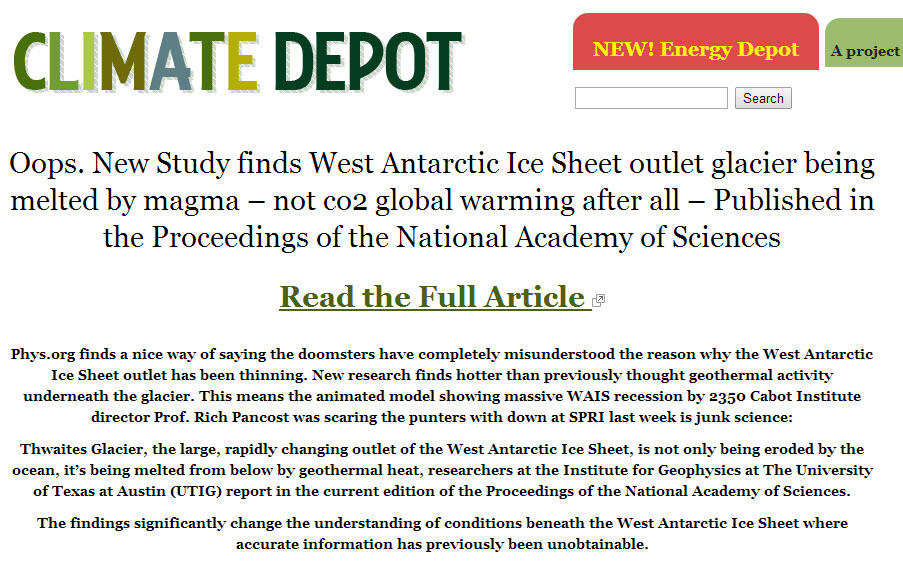 Are a very bad attempt of interpreting the significance of Schroeder and colleagues 2014 research.

(I am not going to link directly to those articles but if you insist then google can find them.)